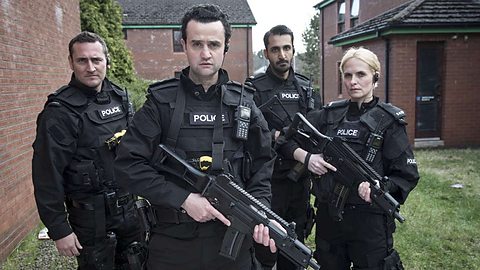 Television drama has come a long way in recent years, the plodding footsteps of The Bill have long petered out and in its place have charged (pun intended) a plethora of police dramas full of fresh twists and plenty of style in what is now a crowded market. Some with more success than others of course, Suspects should be respected for its attempt to turn the genre on it’s scripted head but sadly the execution was a misfire. We love a good cop show, even if most of us don’t love cops. In 2014, Line of Duty proved itself a cut above with the extraordinary story of Lindsay Denton, whose shiftiness was played to a masterful degree by Keeley Hawes. This time round there is a different bad guy to steal the limelight, and the lines on first impressions are much less blurred. This time we know our subject is guilty but what stirs the procedural pot is the question of his motivation and the lives he is dragging into this mess.

There is no misfiring here, certainly not by Danny Waldron (Daniel Mays) who charges ahead of his team and shoots suspect Ronan Murphy in cold blood despite the fact he had discarded his gun. Once his team turn up he convinces them with vicious confidence to alter the crime scene. Rod and Leanne fire hollow shots, Hari (Arsher Ali) doesn’t but is implicated by being there. It’s a sensational opening, holding all the tension and action of a Hollywood thriller but with a naturalistic feel that adds to the atmosphere. The car chase isn’t glamourous or overdone and is all the better for it.

The AC-12 are back, the anti police corruption clan (probably not their official title) remain the same in the shape of DS Arnold (Martin Compston), DC Fleming (Vicky McClure), DS Cottan and Supt Ted Hastings (Adrian Dunbar). Their entrance signals a complete shift in pacing as an intense twelve-minute interrogation scene follows. It’s a sensational exchange of accusations and rebuffing. Twelve non stop minutes of manic wordplay and withering looks and it is a brave move so early on. Mays portrayal of Waldron is fierce, showcasing the nastiness and brute intelligence that might just get him out of this fix. Simply, he is an arrogant bully but one in a position of power and with weapons at his disposal.

After such an intense opening they are surely playing their aces too early? Not a bit of it. The twists unravel as the politics of everyone involved gets more clouded. Hari won’t testify against Waldron and it’s clear there’s a history there. Also, Waldron is snooping outside his house with intention to snipe and that isn’t the act of a good friend really is it? Kate joins the firearm squad to spy information and watches the team falling apart under the pressure of the lies. She also nearly accidentally shoots a child but Danny stops her in time so at least he has some boundaries, eh?

Not content with one murder in an hour, Waldron kills another man connected to his first victim, raiding his house, kicking him in the balls then God knows what, as we are spared the gory details. He fed the dog though which was nice of him – even if it will starve anyway once he leaves. So is Danny killing off officer’s of an old case that affected him? Did he, in the speech he delivered when ordering his second victim to take off his clothes, recall previous sexual abuse that had happened to him or someone close? When he says “I was being sent to meet him with a gun” he comes across as a one man police extremist, intent on a justice that the law itself can’t bring. Notably he later says to Steve “When this is all done I will suffer for my actions, I’m under no illusion of a happy ending.”

In all this havoc there was little time for personal stories. There was no hint of the troubles that Hastings had last time round and we only get a smooch in the car park for Steve and a brief phone call home from Kate. This was all about setting up a new case and HOW. In sixty minutes the show achieved the impossible and upped its game further. A bit melodramatic? Absolutely. An edge of the seat, gawp at the screen moment of triumph? No doubt about it. Has it jumped the shark? Not at all. It’s jumped a skyscraper which has twelve double-decker buses on top and the result is bloody spectacular. And that conclusion was bloody and spectacular.