Pre-production on the movie moves apace. 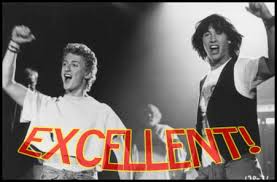 Last week it was confirmed not just the existence of the ‘Bill and Ted 3′ film but that Galaxy Quest director Dean Parisot was attached to direct a script by Bill & Ted creators Ed Solomon and Chris Matheson. The duo wrote it as a spec script in order to get the project moving, rejecting the idea of a remake or reboot.

Now star Keanu Reeves, in an interview with gq.com, has spilled a little of the plot, saying that; “One of the plot points is that these two people have been crushed by the responsibility of having to write the greatest song ever written and to change the world. And they haven’t done it.

“So everybody is kind of like: ‘Where is the song?’ The guys have just drifted off into esoterica and lost their rock.

“And we go on this expedition, go into the future to find out if we wrote the song, and one future ‘us’ refuses to tell us, and another future ‘us’ blames us for their lives because we didn’t write the song, so they’re living this terrible life. In one version we’re in jail; in another we’re at some kind of highway motel and they hate us.”

The script was reportedly finished in March and with both original stars attached plus director Dean Parisot on board is expected to find a studio home shortly.