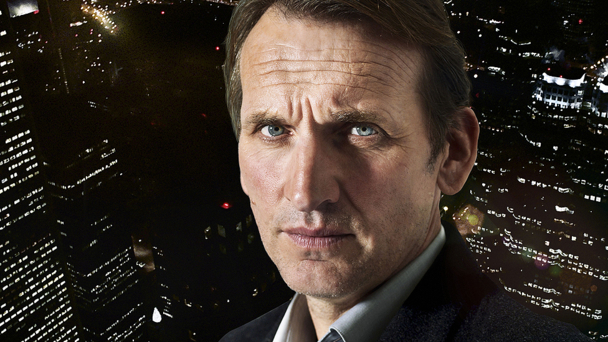 Interview with Christopher Eccleston, who stars in new BBC One drama Blackout.

Can you tell us about Daniel Demoys and his role in Blackout?

Daniel Demoys is an interesting figure in that he was once a very idealistic young man who got drawn into local politics and slowly allowed himself to become cynical and disillusioned, and he lost his ideals. He has an addictive personality and started to indulge himself personally, being addicted to alcohol and drugs.

At the beginning of episode one he meets a man (Henry Pulis played by David Hayman) who holds a mirror up to him, and he sees his reflection of who he really is and tries to destroy it. The drama then becomes a why-dunnit rather than a whodunit.

Daniel’s a contradictory character because he has a deep love for his wife and for his children, but he has pure hatred for himself. So consequently he ends up treating his family disrespectfully because he has no self-respect in the way he indulges himself. He’s probably got more in common with Raskolnikov from Crime and Punishment, or Macbeth, in terms of what he’s done and his battle with his conscious and imagination, which is used stylistically by flashbacks in the film itself.

What is Daniel’s home life and relationship with his wife (played by Dervla Kirwan) and children like?

Daniel and his wife, before the children came along, were probably a very successful, hedonistic couple of the Nineties. There was a great deal of hedonism and they were very much part of that, while being bright, shining political lights. The kids have come along and he’s carried on. There’s an element of mid-life crisis with Daniel, as well as everything else. He’s carried on that hedonistic path but it has stopped being enjoyable. It’s probably fair to say that his wife has been in denial about his addictions. It’s the only way she can deal with it, particularly while attempting to raise children.

What we’ve got within the film and with the three characters (Daniel’s two sons and a daughter), you see the differing impact on children if a parent is an addict, and it manifests itself in different ways in the children. The impact of the addict on the family is a very major strand in the drama which sits alongside the thriller element. It is very much a thriller, and not just about the politics. The politics are the politics of a graphic novel, quite simplistic. If you examine what Daniel is expounding it’s probably communism but what’s foregrounded is the thriller element and the family element. Those are the two things that are primarily the motors of the three episodes.

Daniel finds himself opening up to a nurse, Donna (played by Branka Katic). Would you say she acts as his subconscious?

She definitely serves as a conscience figure. You can say that she’s possibly taking him through the 12 steps, if you analyse it, looking at responsibility and humility. Donna allows him to confess to everything that he’s done. She is his friend more than anything. She gives him tough love and it’s an interesting relationship. She’s brilliantly played by Branka because it’s very easy to make a character like that purely a mouthpiece. Branka has humanised and grounded Donna, and given her humour, delicacy and subtlety.

Can you tell us about Daniel’s relationship with Sylvie (played by MyAnna Buring)?

MyAnna’s character and Daniel are both playing roles when they meet. It’s role play. He’s in an altered state because of the alcohol and drugs, and she, like him, is an addict and is addicted to danger and sexual danger. It’s very clear. You see her as a mum and then you see her in a noir-ish wig, and then there is her husband (played by Andrew Scott) who is also an addict and an obsessive. This theme of addiction is shot throughout all of the characters. What is interesting about Sylvie is that Daniel instinctively, in his alcoholic state, understands what she needs to fulfil her fantasies. So psychologically they’re wired up for each other in a very dangerous way. Two addicts together, bringing hell down on themselves.

You have worked with Andrew Scott before (Lennon Naked, BBC Four). What was it like working with him again?

It was great working with Andrew, he played McCartney when I played John Lennon and I think he’s an excellent actor. I was really pleased when I heard he was going to join us on Blackout. He’s an actor I really love working with and admire. It’s a fantastic performance and his character (Detective Bevan) is similarly an addict. There’s a kind of brilliance to that character’s detection of what is going on and a brilliance to his doggedness. Bevan’s after the truth like a holy grail and he’s very decent in that way, but his obsession with his wife is the flip side of it. It’s the shadow side of him and his doggedness with finding who she is or isn’t sleeping with is very damaging to her and her children. So he, like Daniel, has a shadow side.

What made you want to be involved with this drama?

It’s always very interesting to be asked to play a character who on paper is unsympathetic.   Characters who do the kind of things that Daniel does don’t scare the audience. Audiences are very bright, and those of us who make great television continually underestimate the audience. They’re always ahead of us and they’re always willing to take difficult characters into their hearts because they know how difficult their own lives are. For example, Raskolnikov fascinates people because he does something that we all have nightmares and fears about doing. Macbeth does the same and that’s why go and watch those people and why we follow those characters, and Daniel does a similar thing. There’s a fascination in watching somebody trying to wriggle out of what they have done and that’s what we do with Daniel.

Can you relate to Daniel?

It’s that Dennis Potter quote that I’ve used before and I love. When he writes his characters he used to write them as half ape and as half angel, which is probably what you could say about human beings generally. So I can tell you that I’ve never been an addict and I’ve never murdered anybody but I can still relate to Daniel Demoys.