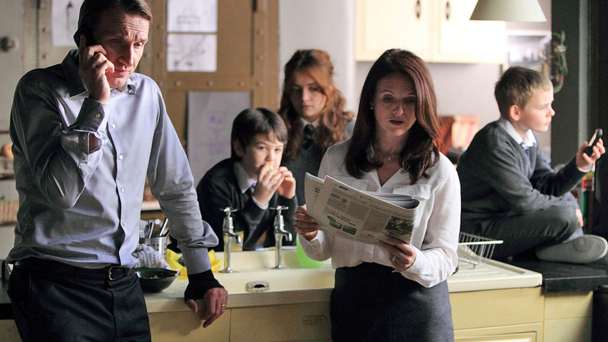 Interview with Dervla Kirwan, who stars in new BBC One drama Blackout, which begins Monday 2nd July at 9pm.

What did you think when you first read the script?

I was totally intrigued by the script and I also loved that it’s the antithesis of a happy TV family. The research has gone into the true effects of alcoholism and this great journey that they go on, where Daniel has to try and somehow redeem himself. It’s very powerful, and very real.

Tom Green’s (director) involvement and work was what initially attracted me to the drama, and the script was very strong. It was a difficult job to do because it was quite oppressive. It’s the dark side of human emotion, that capability that we all have to entirely self-destruct, and to try and salvage something out of it all.

How did you prepare for the role of Alex?

It’s like diving into a swimming pool and not knowing if there’s any water. You literally just free-fall. There are so many experiences in life and so much research to be done, it’s about having empathy. The actor’s job is to put themselves in the shoes of the character they are trying to portray as truthfully as possible. It felt very right when we were filming. Acting with Christopher really does make you raise your game because he’s so good, so hopefully there’ll be a level of acting there that is very sophisticated.

Your character is married to Daniel Demoys (Eccleston). How are we introduced to them?

We come into the drama and find Daniel at rock bottom after so long of continuous drinking and drug-taking. The world that they live in is very seductive. They’re quite well off, they’re self-made and they had high ideals when they came out of university together. Daniel went into local politics and that’s the wonderful trap of that façade. How do you in this day and age ever turn around and face your demons where every move you make will be documented and publicised and turned in evidence against you rather than help you. It’s a very interesting world that they live in.

Alex seems almost in denial about Daniel’s alcoholism. Would you agree?

That’s exactly what happens. There’s the alcoholic, and until that word is actually spoken within the relationship and confronted, there’s the person who drinks excessively and there is the other person who is the enabler covering for them. That’s what she’s done up until this moment where we see her confront him. She tries desperately but he’s a loose cannon. How do you contain someone like that? It’s gone on for several years and she’s let it spiral out of control.

Could you tell us more about their relationship?

Alex turns a blind eye to everything and has done for a long time. She certainly has to face the music about it all but she’s on her own doing it. You never get the impression of extended family or friends or colleagues that she could ever trust. There’s a feeling of isolation, and that’s what alcoholism does inevitably. There’s that intense feeling of shame surrounding alcoholism, and the family feel that. Alex definitely suffers from feeling a sense of failure and low self-esteem. It’s very difficult for someone like that to ask for help.

How does Alex feel about Daniel becoming mayor?

It’s all a sort of madness that happens with this kind of man. Extraordinary things happen to him. Perhaps for her own pursuit of power it’s all very tantalising but it’s also deeply scary for her. Plus he is trying to ask for forgiveness. He’s trying to move on. It’s very bizarre for her. It’s terribly powerful and that aphrodisiac that is power is a part of their relationship.

How was it working with Christopher Eccleston again?

I was deeply excited because it’s a perfect part for him. He’s an intensely charismatic actor and also really dangerous. That’s exactly what we needed for this man. He’s a superb actor to work with. I’ve been very lucky with having a run of working with very special people and it just makes you work harder.

What can the audience expect from Blackout?

The drama is brave both stylistically and dramatically, and the issues that it raises are really important. At the same time it’s very emotionally based, there’s something very earthy about it. It was quite an emotional rollercoaster making it and very exciting. It’s a collective experience when you’re making TV. You think of all the people who work hard to make this extraordinary and you just hope that it works well.