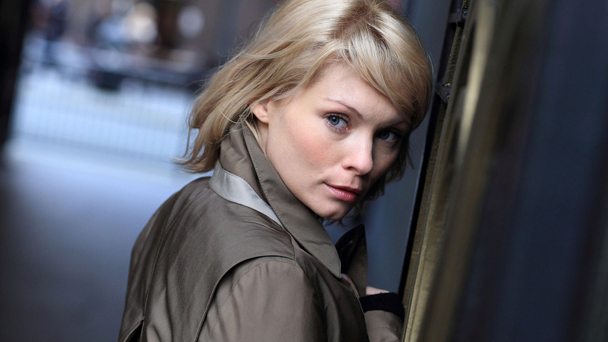 Interview with MyAnna Buring who stars in the new BBC One drama Blackout, which begins Monday 2nd July at 9pm.

Can you tell us about Sylvie and her role in Blackout?

Sylvie is a bit of a tortured character. In terms of the story, she’s a girl that Christopher Eccleston’s character Daniel bumps into in one of his blackout periods, when he’s out drinking and behaving badly. When he decides to get his life back on track she’s a reminder for Daniel of the life that he was pursuing before he decided to turn straight.

She’s a bit of a lost character and in a marriage that she got into when she was very young (with Andrew Scott’s character). She’s representative as somebody who is a young mum desperately trying to claim her own identity again and decides to do that by going out to clubs, which is where she met Daniel. He represents for her another kind of life, another way of living, and that of course is a lie. It’s not the true him. When he tries to break free from that relationship, she does her very best to try and hold onto it.

There are two sides to Sylvie. There’s Sylvie at home where she’s much more relaxed and with her kids, and there’s the Sylvie where she paints on a mask. We created a character who we thought would have grown up inspired by old Hollywood films and stars who were her inspiration and role models. When she goes out she very much tries to recapture that. She was great to play because I got to look and feel really sexy with the most incredible hair and make-up. When we first meet her she’s in proper vamped-up mode.

What made you want to be involved with the drama?

Sylvie is just quite an intriguing character and I was intrigued as to how to make her real and bring her to life. The premise of corrupt politicians turning straight and having to deal with the conflict of whether you admit to a lie in order to perform for the greater good, or whether you’re honest, it’s about how you live with yourself. That’s a question for most of the characters in Blackout. Can you live with yourself if you’re not entirely honest? That aspect was really intriguing, and without a doubt it was Tom Green’s involvement. When I talked to him before we started I was really intrigued to see what that would be like.

This is darker than anything I’ve done on TV before. There’s a real sense of menace to this part that I haven’t done before. Not necessarily that Sylvie is menacing, although she can be as this is a character who is really pushed to the edge. I hadn’t ever really explored that before so that definitely drew me to the part.

What did you enjoy most about filming?

I enjoyed working with such an incredible cast and with people who have a great wealth of experience. It’s just really exciting to work alongside them. Christopher’s a fantastic lead to work with, as is Andrew. I hadn’t worked with either of them before but I’d work with them both again in a heartbeat, they were such a joy. Andrew had me in stitches most of the time I would be crying with laughter. There was one scene where we had an argument and I ended up pushing him through the set. He was very lovely about it.

Tell us about Sylvie’s relationship with Daniel (Christopher Eccleston) and Bevan (Andrew Scott)?

Sylvie’s married to Bevan. They met when she was very young and they now have two young children.  When we were talking about the character Bevan, we thought he was someone who had traces of autism and the inability to be emotionally honest. Together they’ve created this two point four family life, but it’s quite stifling for Sylvie and she struggles with it. She struggles with being put on a pedestal by someone she’s not really sure is necessarily the one for her. Sylvie goes out to find this excitement that she feels is lacking in her life and stumbles across Daniel, who becomes that excitement for her. He becomes a way out and a world of possibilities for her. Although most of those possibilities are created in her own head, for her it’s very real. Ultimately she comes full circle and realises the lie is the world she’s created with Daniel in her head, and the possibility for potentially something much more real is with Bevan.

Playing Sylvie was challenging because she’s quite far removed from me. The challenge was creating a character who, when we first meet her, very much wears a mask and isn’t herself. Here she’s someone choosing to play a part in order to deal with life at times. That was quite interesting in order to make it real as opposed to something two-dimensional and caricature. Hopefully I’ve achieved that with Sylvie.