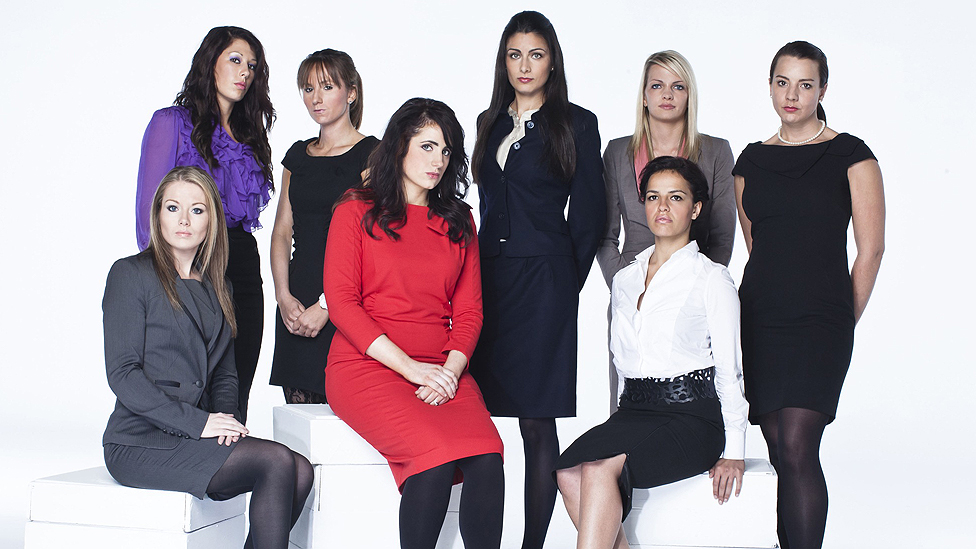 Bulgaria-born Bilyana started off her career aged six, collecting snails from her grandparents’ farm to sell to pharmaceutical companies, and is now training to be a Wealth Manager for British entrepreneurs. The former head girl, who prefers rollerblading to and from work, feels her biggest achievement is her attitude to life and a dedication to advancing by learning and working hard. She loves dancing, baking and travelling. She describes herself as positive and adaptable but feels her greatest weakness is dealing with confrontation.

She says: “I got myself from a Communist block of flats in Bulgaria to the top of a skyscraper in the heart of the City of London.”

Gabrielle’s first job was helping at her parents’ fish and chip shop when she was 14. She learnt how to ride a bike last year and loves running, photography, drawing and painting watercolours. She says that she rules her life on gut feelings, and as a result never has regrets. Gabrielle first got a passport at the age of 19 and has had the travelling bug ever since, once travelling to 13 different countries in a year. Gabrielle feels her persistency is her strength but her trusting nature is her biggest weakness.

She says: “When it comes to business I can be like an animal and I will roar my way to the top.”

Former 18-30 rep Jade grew up helping at her parents’ caravan park. She feels her strength is her resilience and says that she doesn’t have any annoying habits. She enjoys going to the gym, hosting dinner parties and her passions are money, her friends and life. Jade loves cars and often attends drag racing events. She lists her parents as her role models, as both have their own businesses, her father owns a holiday park and her mother is a funeral celebrant.

Jane is a mother of one, and lives in Kilkenny, Ireland. She admits to being opinionated and a workaholic but also says that she is determined and honest. An animal lover, Jane says if she never had to worry about money she would open an animal shelter for cats and dogs. Jane used to play hockey for her province and camogie for her county. Her role model is her glamorous grandmother, who is an empowered woman with 12 children.

She says: “Anything is achievable if you have drive, determination, and a seriously good work ethic.”

Homebody Jenna has never been away from home for longer than a week and can’t cook or clean. Jenna spends her spare time horse-riding and competing in show jumping events and competed at the Wembley 1998 Horse of the Year show. She describes herself as a ‘people person’ but also admits to being a bad loser. Jenna is dyslexic and her role model is her dad, who is also dyslexic but set up his own business building horse boxes. Her ambition is to earn a million pounds before she turns 30.

She says: “My personality and character is ‘once seen never forgotten.'”

Katie is a huge football fan and loves to attend Fulham football matches. Katie, who got married last year, admits to talking too much but feels she can get on with anyone. Her first job was as a pot washer in a French restaurant when she was 13. Katie wishes she was the brains behind Heinz Baked Beans and says that she admires Barack Obama for his charisma.

She says: “I would call myself ‘The Blonde Assassin’. I let people underestimate me just so I can blow them out of the water.”

Scot Laura is a mother of one who loves skiing. A former ice skater, she once skated with Torvil and Dean. She says her strength is that she will go out of her way for others however she admits to sometimes being stubborn. She is inspired by Michelle Mone as a powerful working mother from Scotland who created a business empire.

She says: “I am going to be one of Scotland’s next big exports.”

Bubbly Maria opened her own Greek restaurant at the age of 19 and is inspired by Gordon Ramsay. She admits that she is headstrong and cunning when it comes to business, and says that her persuasive charm helps her always get what she wants. She enjoys shopping, socialising and is an adrenaline junkie. Maria wishes she was the brains behind cotton buds as they are cheap to make but are used in every household. 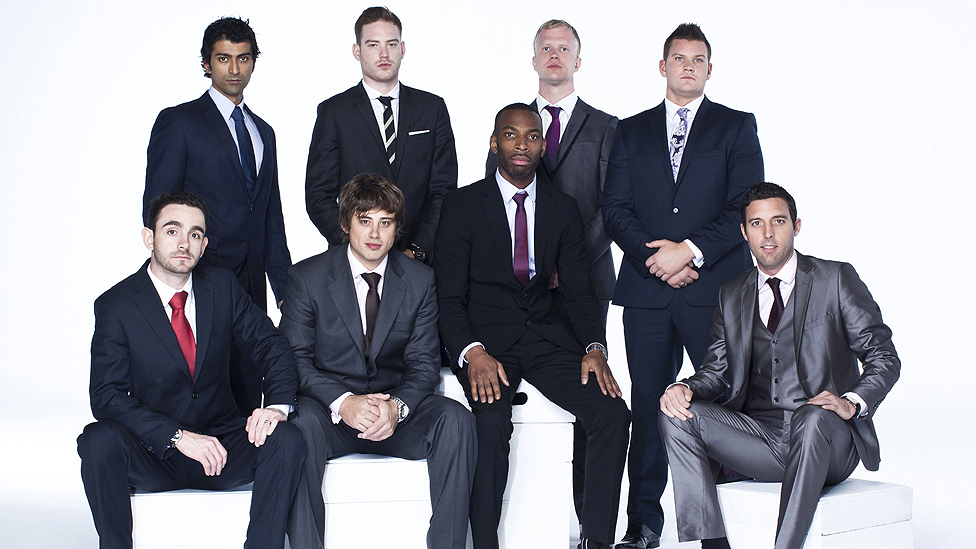 Father of two Adam loves swimming, playing football and cycling. Adam says that he is confident and enthusiastic but that he is not ashamed to show his emotions. Adam’s first job was stacking bread at his local Co-op. He now runs a wholesale and retail fruit and veg business and manages his own property portfolio. He wishes he was the brains behind Virgin Galactic because he feels it is innovative, a world first, and offers people the chance to have their dreams come true. Adam organises the annual turning on of the Christmas lights in his local community.

Thrill seeker Azhar enjoys shark diving and has two pet sharks. He feels his biggest strengths are his professionalism and integrity but also admits that he gets very restless very quickly. In his spare time Azhar enjoys strength training and Muay Thai and loves scuba diving due to his passion for marine life. Azhar is inspired by the IKEA brand and admires its founder, Invgar Kamprad, for always sticking to his high self-imposed standards.

He says: “It’s not who shouts the loudest; it’s who has the ability to control the conversation.”

Have a go hero Duane once chased and caught a hit and run driver trying to flee the scene of a crash. He says that his biggest strength in business is his creativity but that his attention to detail can be somewhat lacking. Duane enjoys going out to bars and nightclubs in his spare time and says he is inspired by the Jaegermeister brand. He has met Tony Blair as part of a voluntary group.

He says: “I am a winner and I am a fighter, in order to be the best you’ve got to beat the best.”

Michael says his biggest strength is his positivity but admits that he can be impatient. In his spare time Michael enjoys fishing, walking and boxing. Michael, who is dyslexic, wishes he had worked harder at school and regrets leaving at 15 and not finishing his education. He would have liked to have been the brains behind Apple as he admires the way they cornered the market with their products and set themselves apart from their rivals.

Nick, who lived in Switzerland for seven years as a child, was named ‘emerging entrepreneur of the year’ by Insider Magazine in 2010. When Nick was nine years old he earned money by selling lost golf balls back to golfers. He enjoys playing squash, snowboarding and cooking, and loves buying kitchen gadgets. Nick feels his intelligence is one of his strengths but knows his impatient nature can sometimes make him come across as arrogant. He would like to build and sell his own businesses before becoming an investor in start-up companies, and cites Steve Jobs as an inspiration.

He says: “I’ve got lots of ideas, I know how to whittle them down into ideas that will work and I’ve got what it takes to make them actually happen.”

By day Ricky is a successful recruitment manager operating across the UK science industries, and by night and weekend a heavy hitting professional wrestler. Ricky, who has an Honours degree in Biochemistry, spends his spare time competing at wrestling events and is also an amateur body builder, training five to six times a week. Ricky recently got engaged to his girlfriend, and says his greatest strength is his people skills and that his weakness is that he is a perfectionist. Ricky wishes he was the brains behind Facebook and once played tennis against Tim Henman at Wimbledon.

He says: “I truly am the reflection of perfection.”

Ireland born Stephen loves learning new languages, reading and writing stories. Stephen says that he is a focused and down to earth person who is inspired by Muhammad Ali. He feels it is important to make every day count and tries to live life to the absolute limit. Stephen, who once lived in New York, has a passion for sport and the outdoors and once played in the FA Cup as a semi-professional footballer.

He says: “Enthusiasm is a huge asset of mine and I believe it’s caught and not taught.”

Tom feels his biggest strength is his self-assurance but says that he can sometimes be over-confident. He also admits he isn’t great at handling early morning starts. Tom enjoys going to music events and West Ham football matches in his spare time and also plays golf, tennis and football for a Sunday League team. Tom’s passions are fine dining and wine and he also loves travelling around the world. He is inspired by Candy & Candy and wishes he was the brains behind ASOS.

He says: “I’m confident, charismatic and some people say I’m quite good looking, so that adds to the bill.”